We are stardust...we are golden...

A candid taken by a friend inside Cass' house with the gang of admirers. 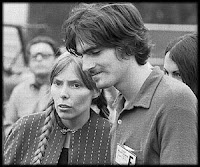 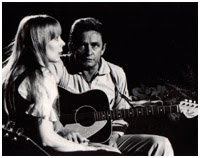 I've never met Joni Mitchell. I had heard a lot about her when I was still in high school. But my taste then ran to 'surf' music because that is how we spent our out of class time, either surfing, or waxing our boards. (Sometimes we waxed more than surfed, as Florida is not one of the surf capitals of the world. The waves have to be begged into the shore.)
But I was at some friends in California and they were going to the Whiskey or Troub - I can't remember which. I was underage and always 'carded' but my rocker boyfriend was playing the strip as well and he knew the doorman so I was allowed side stage with a promise of not ordering a drink. And the assurance that my boyfriend would 'keep an eye on me'.
That was the was wolf in the henhouse...LOL
The lights dimmed. Joni appeared and sat center stage. She was in a blue dress with a patchwork skirt; her earrings long and dangling at her shoulders.
Then she began to sing.
She looked and sounded like an angel. There are no pictures I've ever seen that do her justice. a The lyrics, though, the lyrics were speaking to me. Somewhere deep inside of me there were the same lyrics that had never put into words.
I sat still from the first set until late that night when the second was over. Afraid to slip away as the magic might end.
The second set started very late. Girls in long dresses came and passed out sunflower seeds and carab - they were not supplied by the club but by Joni herself. They say that she always has fresh flowers on her set no matter where or when she sings. It is as if she knew we couldn't move, were rooted to the spot and needed a bit to eat to tide us over.
Later I was told the second set was late, not because she wanted it to be, but all the guys in all the bands along the strip wanted to come in after work and listen to her. In a profession that one gets jaded about music, both their own and others this is the greatest of compliments.
Joni always seemed to have such incredible love affairs, Graham Nash, Dave Crosby, James Taylor but it was said she is the one that ends them and breaks their hearts. For some reason she was afraid to grab happiness when it was offered to her.
Years later, I found out why her heart had seemed broken and her lyrics were ripe with the words of unrequinted love; she had given up her baby daughter when because she could not take care of her.
To lose a child, no matter how, is joining a secret club with other women who would rather not have anyone else in the club. A flip way to put it but in this matter NOTHING is worse and no one should experience the grief you have.
I thought of that when I lost my Ley. But almost at the same time he was gone, Joni found her daughter. I'm so happy she did.