I first saw him at San Carlo in Napoli in La Boheme.

He was handsome with no beard. He was young. He possessed the most wonderful voice I've ever heard. He liked to say it possessed him. He called it 'the voice' like it was outside himself.

The next season we followed him to La Scala in Milano. Turnandot.

The next season we took the overnight train way up to Trieste to see him in La Traviata.

Then there was the magic night in Rome where my beloved brother, Michael and I sat at the Circus Maximus and watched him in Aida. Supposedly he was there only to add to the performance by the great star, the Diva Pryce. The aucostics were terrible. The real elephant had a bowel problem right 'on stage', but no one laughed. The crowd was simply awestruck.

We were so glad to meet him again at the Met in New York performing the wonderful 'Madamn Butterfly' he almost had us believing he was an American naval officer with an Italian accent. Truly the suspension of disbelief.

This is how I'd like to remember him, arms outstreched holding his familiar 'hanky'as a prop. 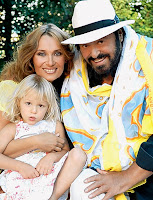 He was married twice. I read that he was about to renouce his second wife Nicoletta before he died. The mother of baby Alice. But who knows. I ignore any gossip. His life was his own and he gave me the grandest of gifts, himself and that voice.
Such joy. 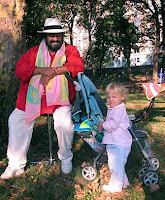 When the Italians hate a performance they boo. When they love one, they give ovation after ovation. Some nights there were 15 and roses thrown everywhere on stage. More. More. 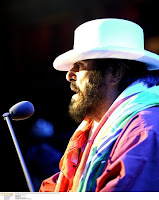 It is often said the passion of opera is with the tenor and not the soprano. Maybe not every tenor but certainly this quote fit him. He could steal the show from Leontine Pryce, Brigit Nelson, Joan Sutherland and every other leading lady. However he was the most generous of performers. He was real. His was so humble, he would never upstage someone on purpose.
But of course he did.

He loved eating. He loved his daughters. He loved his home town. Next to Italy he loved the Bahamas. He said the beach was special there. Amazing how most of us only see the dingy commercialism of Freeport or Nassau.
He had the kindest heart. He was supposed to sing at Princess Diana's funeral but he cried instead, too upset to perform.
Next he would endure pancreatic cancer. However his philantropic endeavors did not stop. He left us owing money to his family because he would rather give it than make it.
It was his to share anyway. His birthright, not theirs.

Just as I miss Italy I miss him. I always will. To hear Nessun Dorma, I cry. My tears are my tribute.