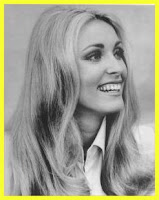 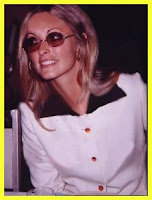 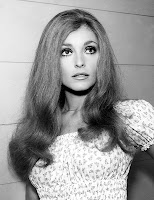 The 40th anniversary of
Sharon's death is this August.
Looking back at pictures of Sharon, unlike so many other women of the era, she is never dated in her approach to fashion, makeup or hair.
She was timeless and ethereal in her beauty.

For her short time in the entertainment business (and on earth, she died at 26) she is one of the most photographed women ever. Her looks were perfect for the still camera, never posed but always poised.

I solicited friends and other fans to send me either out-takes from photo shoots, candids or little seen pictures. So some are new, some or old but
all are stunning. 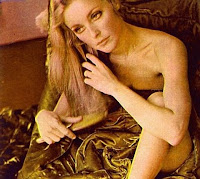 One of my favorite pictures of Sharon. This is not rare or candid, but I don't care - Sharon's inner beauty is remarkable

Obviously this is from a news feed, but it shows Sharon's happiness in Rome at the Vatican with her new husband. A devout Catholic Sharon was eulogized in her local parish church.

Roman is probably an atheist, he certainly looks uncomfortable.

A candid taken of Roman and Sharon in Cannes.

People were furnishing newspapers and magazines with any pictures they could find after Sharon's death. 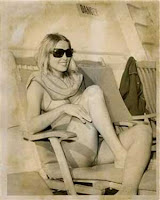 Exactly how I would like to remember her. A wonderful free spirit. I wish we had met. Friends that knew her said her looks were angelic and yet her personality full of fun and down to earth. 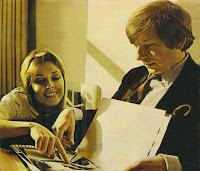 Looking at photo outtakes in London. 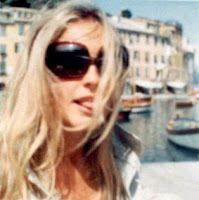 The Jackie-O sunglasses. But Sharon wore them first! In Venice, this is a candid from an acquaintance who was with the photographer. It was marked 'honeymoon trip'. Anymore have more information?

There is a story that Roman and a friend were cruising the strip and saw a beautiful woman. Roman made a remark through the window telling her what a great ass she had; the woman turned it was his own wife, Sharon. Roman acted like he knew all the time. It's doubtful.

From the pensive picture below I think he realized AFTER she died.

It is like Emily said in Thornton Wilder's OUR TOWN:

“Oh, earth, you’re too wonderful for anybody to realize you ”

Then she asks, “Do any human beings ever realize life while they live it?—every, every minute?” 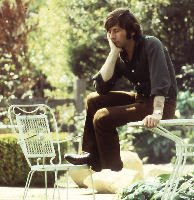 The Wasser collection of Roman's visit to Cielo after Sharon's death.

Sharon's Ferrari, it was not parked at Cielo that fateful night in August, it was 'in the shop'. Mrs. Tate was told the killers thought Sharon was not home. I have my doubts.
Rather, I think her beauty astonished Manson and she became the tangible icon of everything he would never be able to possess. He mistook her physical looks for the essence of goodness that shown through her.
Reflected back at him was only his filthy evil spirit. Manson enjoyed manipulating women whose weakness's he used against them. In that split second of seeing Sharon he saw no weakness, no imperfection, not in her face nor in her heart. 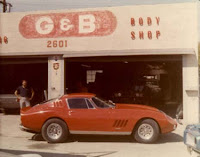 The Ferrari after it was given or sold to a friend when Sharon died. The picture was sent to me from an on-line acquaintance who hopes to be anonymous. He also lived at Cielo after Antobelli moved out. That's how I found him.
When I spoke with him he said there was little pleasure in owning or driving something that belonged to someone else. I asked him if he had a 'used' vehicle before, he answered 'not one whose owner had suffered such a terrible fate. '

From an Italian magazine shoot. Undated. My husband and I had a hammock exactly like this one on our veranda in Italy. Bamboo or rattan was sold on the side of the streets all along the Appian Way. 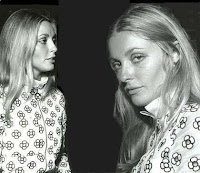 Doris Tate looks at Sharon and her baby, Paul's, new headstone. Paul was buried in her arms. It was the only time Sharon was ever to hold him. But now she holds him in eternity.

Cannes. I added this one because Sharon is usually so photogenic but this one is the worst picture I've seen. She needed a new bathing suit top - this one made the boobs droop! She looks a bit buzzed. I liked it anyhow.

No date - an out-take that was rejected due to the 'fog' on the right side. I liked it. It seems prophetic. 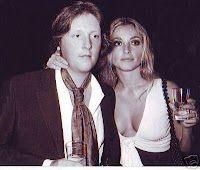 Who is this man with Sharon? When was it taken? Anybody know? A Braizilan website owner was not sure either. He can't remember where he got it. 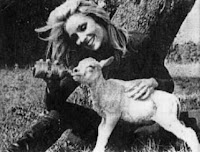 Sharon loved animals. One of the reasons all the dogs were at the guesthouse that awful night is she was feeding a baby kitten with an eyedropper.

No one knows why they did not bark. They certainly barked the next morning when the police showed. I suspect they were drugged or either Garretson was paid to take them away for awhile. 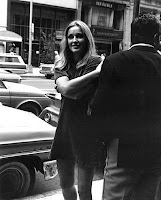 With Hatami, her favorite photographer and her friend. 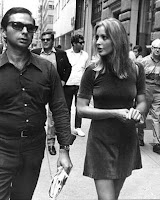 With Hatami. It's odd to get a glimpse since he's usually behind the lens. He was there the time she came in contact with Charlie Manson. He may have sealed her fate when he told Manson to exit down the alleyway, behind Cielo. The next day on a flight to Rome she asked about the 'dirty strange man'.

We see many black and whites of the wedding in London, but seldom one in color.

Roman said "We were a grotesque sight" He might have been in his Jack Vernon foppish suit, but Sharon could wear a burlap bag and look terrific. 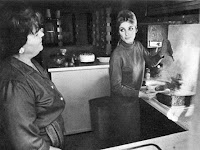 With Mrs. Tate. No date. No place. Probably the Tate's kitchen where Sharon was raised to help her mother with the cooking and cleaning.
Roman says Sharon was a great Southern cook and loved to prepare all the food for dinner parties. Her standard menu included ham, potato salad, congealed salads, and Pineapple Upside Down Cake. These 'down-home favorites' are repeated by every cook below the Mason-Dixon line. I laughed when I found this out because that has always been my menu for family dinners.
Later when Sharon could afford a maid, she often helped still. She told an interviewer, "It wouldn't be polite to have her wait on me."
The afternoon before the murders she asked Mrs. Chapman if she would like to stay the night because she was leaving later than usual and would have to be back early the next morning. She didn't wish to inconvience her. 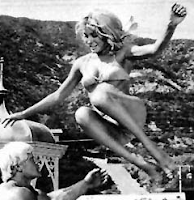 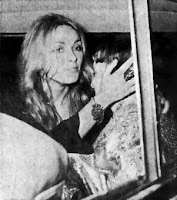 Did Sharon realize she was hugging someone who had probably had an affair with Roman?
Instead she played match maker for Mia to date Peter Sellers. Maybe it is true when they say "hold your enemies closer than your friends" or maybe it was just her forgiving nature.

Thank you for this wonderful site.
Sharon Tate was a beautiful person both inside and out.
She loved life and was looking forward to the best years of that life.
As we all know, she never saw that promising future.
Sharon is gone, but she lives on in our hearts.

These photos are beautiful. Thanks so much for sharing.